Shout out to my sister! 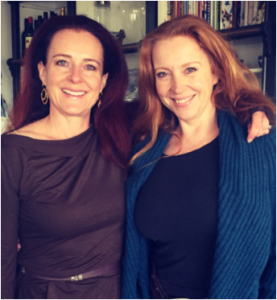 My sister just won an award and I was there to see her win it.

As a TV producer, she’s been nominated for Logies and AACTA’s before but it was the InStyle Women of Style Award for Entertainment that finally gave her the gong. It was awarded for her work as producer of Offspring, Gallipoli and Puberty Blues and not her wardrobe – though as a sister I have been known to borrow a thing or two…

Imogen is a reluctant role–model for people wanting to mimic her career path. As she herself says, her greatest career highlight is “having a career”.

Imogen marches to the beat of her own drum. For the 40 + years I’ve known her she has only pursued what interests her deeply and has deeply pursued it. She has never chased fame, $ or success.

She has an innate ability to tune into the zeitgeist – possibly honed by hours of “research” into daytime tele in the 80’s.

Imogen is a wicked problem solver. She has an almost forensic ability to pinpoint an issue. This can be slightly annoying as the older and somewhat vaguer sister.

One of the hardest things I’ve ever had to do is wait for her to come round after neurosurgery at Prince Alfred hospital in Sydney. My mother and I were literally counting her faculties as she came to. Could she move? Could she talk? Could she remember?

I’m reading a beautiful book on resilience by Anne Deveson. As I read these words I can’t help thinking of my sister:

Hardship is one of the engines of human development…. Resilient people face reality with staunchness, make meaning of hardship instead of crying out in despair, and improvise solutions from thin air.

And that makes this award just that little bit sweeter

If you want to hear an interview with Imogen check out Clare Bowditch’s inspiration bomb http://bigheartedbusiness.com.au/bomb/imogen-banks